Come August 31st, Malaysia will be celebrating 64 years of independence. Despite the scaled-down festivities, there’s no reason why we can’t keep the Merdeka spirit alive - albeit differently. Team AdEasy reminisces about what makes us uniquely Malaysian.

Ah, Merdeka Day. It’s that time of the year when our sense of patriotism is heightened. From office buildings to vehicles, it’s not uncommon to be greeted by sights of our national flag (fondly known as Jalur Gemilang) flying high at every place imaginable. One trait that Malaysians have in common? Our innate ability to unite as one and elevate each other’s spirits when the occasion calls for it. :)

Usually, the National Month festivities kick off with the announcement of the Merdeka Day celebration theme and logo by the Government. Fun fact: while the first Merdeka Day theme was chosen in 1970, the first logo was only introduced in 1976. Despite the muted affair this year, it was announced that the Merdeka Day 2021 theme remains the same as last year’s, which is Malaysia Prihatin (Malaysia Cares).

How do ordinary citizens celebrate Merdeka Day? We love our countdowns, fireworks, and Merdeka Day parade, which we’ll be missing out on again for the second year in the row. It’s a bummer, but the most important thing is to remember what we appreciate most about our nation.

How Malaysian Are You?

I got my teammates to answer a poll to see where they stand, just for fun.

Question #1: Pump up the patriotic spirit!

If major festivals such as Hari Raya, Chinese New Year, and Christmas have their own tunes to bring on the festive vibes, these iconic patriotic songs play a role in getting Malaysians into the Merdeka mood.

Tanggal 31 is a clear favourite. If you’re part of the “Err…I only know Negaraku” group, fret not. It’s never too late to get acquainted. (Bonus: Keranamu Malaysia and Jalur Gemilang - because they’re unavailable on Spotify).

Question #2: When it comes to local fruits, there's only one that reigns supreme. Are you a lover or a hater?

Malaysia’s tropical weather creates the perfect setting to savour succulent local fruits. Besides being the undisputed King of Fruits (at least in Southeast Asia), durian is regarded as the world’s most divisive fruit.

Need we say more? Now the question is, which side are YOU on?

It’s hard to pick just one, so everyone chooses as many nostalgic games as they like. The best thing about these games? They don’t cost much, and you don’t need an Internet connection or devices to play. #cheapthrills 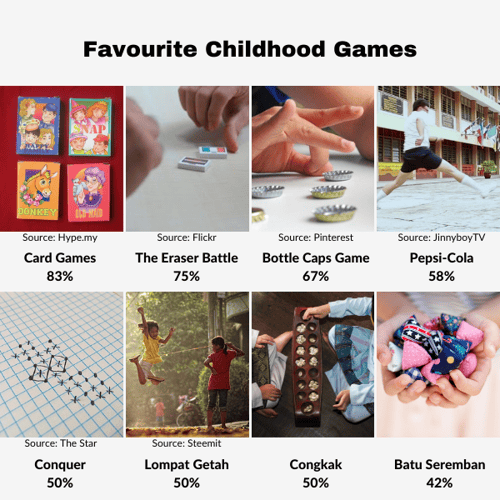 Question #4: Unique quirks that every Malaysian can relate to.

i) Our Makan Culture

One trait the whole team collectively agreed on: we love our food. After all, Malaysia is the epitome of a cultural melting pot, which is reflected in our uniquely diverse local flavours. As our Product Manager, Vanessa puts it, “Our cuisines are delicious, and they don’t hurt our wallets.” We’re so passionate about Malaysian food, our conversations often revolve around them.

“We have the best nasi lemak and rendang!” – Rufina, Media Manager

Hipster cafes and Michelin-Star restaurants are trendy and all, but our hawkers are the true unsung heroes who save our stomachs (and wallet) when hunger strikes.

“The nasi lemak bungkus and keropok lekor (with the accompanying chili sauce) from roadside stalls are the best!” – Therine, COO


Our national language is Malay (Bahasa Melayu or BM). Language purists may abhor this, but bahasa rojak (loosely translated as mixed language) is the language that unites us all. It’s basically a mixture of different local languages, thanks to Malaysia’s wicked concoction of multiracial citizens.

iii) How We Greet Each Other

How do everyday people address one another in Malaysia? These terms of endearment make everyone seem like one big family, although we’re not related.

Although we’ll be reliving the glory of Merdeka indoors, we will create new memories to look back in the years to come. Also, don’t forget to check on your family and friends, especially during these uncertain times. On that note, Team AdEasy wishes all Malaysians Selamat Hari Merdeka!

How I Learnt To Code In 3 Months And Got Hired

My 3 Tips To Manage Anxiety While Working From Home

5 Career Advice I Would Tell My 20-Year-Old Self