Prominently mounted alongside highways and main roads, it’s hard not to notice the gigantic structures we call billboards. They are designed with one purpose in mind – to catch one’s attention and leave a memorable impression with eye-catching visuals and clever copy. Is billboard advertising still effective, though?

Let’s talk about static billboards, one of the predominant “printed” media under out-of-home (OOH) advertising, which refers to advertisements that reach new and potential consumers when they’re outside their homes. Static billboards in Malaysia come in several formats, such as spectacular, unipole, gantry, overhead panel, freestanding, 96-sheet, and more. The tried-and-true impact of static billboard ads is undeniable. With static billboards, all you need is a single larger-than-life visual to capture millions of impressions on repeat. Imagine the number of eyeballs looking at your advertisement every single day. 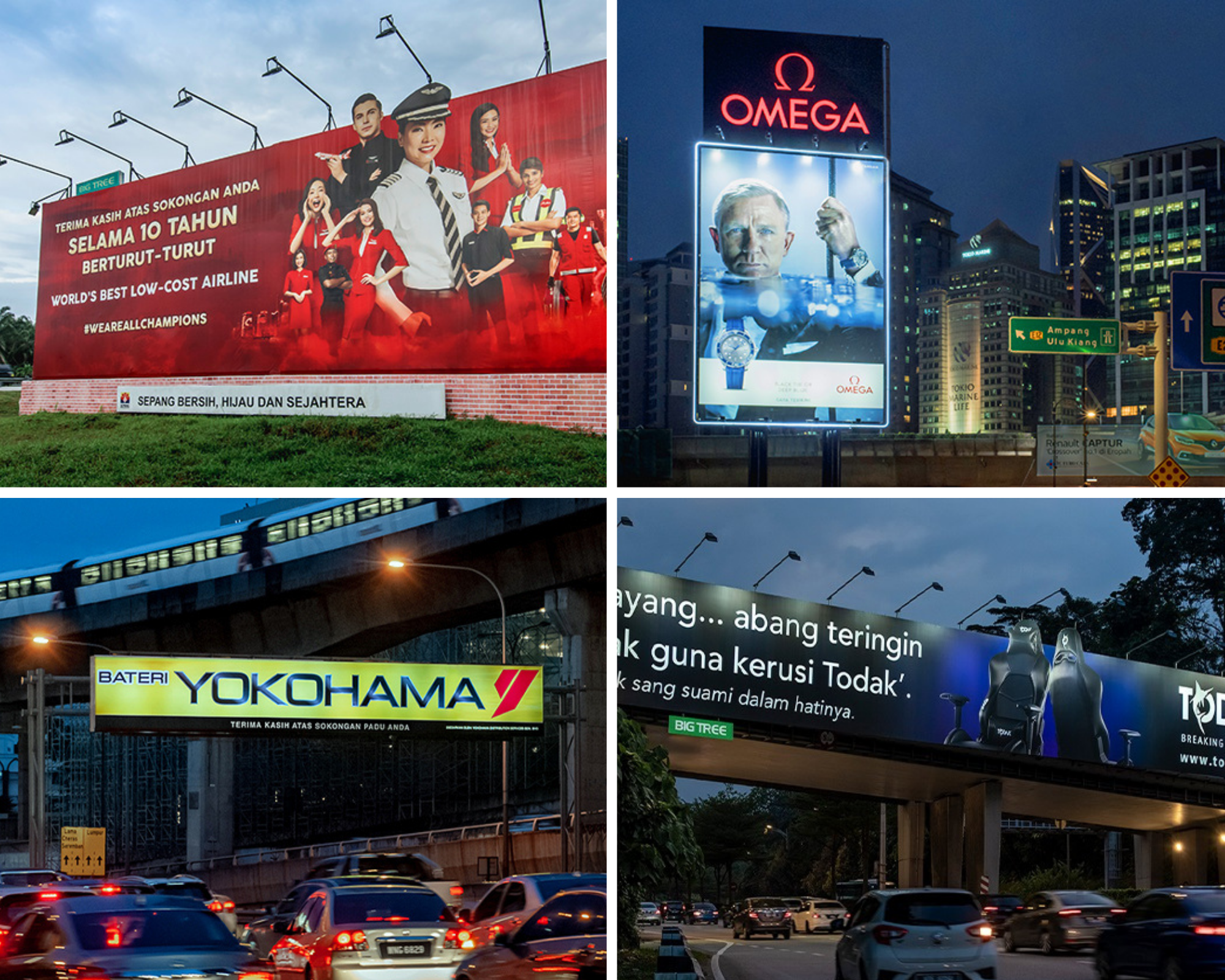 Notice the similarity that these static billboard ad examples share? They rely on simple imagery and minimal copy to convey the essence of the ad campaigns. This is where the “less is more” mantra applies, and that’s the beauty of static billboard advertising. Drivers and passersby only have seconds to catch a glimpse of your static billboard ad before shifting their focus back to what’s ahead of them. Hence, you have to make those seconds count.

I know what you’re thinking, “Why should I invest in static billboard ads when most businesses are moving towards digital advertising?” Some online advertising channels are budget-friendly, but the moment a user turns on ad blockers, or switches off their mobile data or WiFi connection, online ads are no longer reachable. The same can’t be said for static billboard ads. Come rain or shine, they’re still out there standing tall. Need more convincing? Here’s why static billboard advertising is still effective today.

Unlike online advertisements where you can opt to skip them, there’s no escaping static billboard ads in Malaysia. They are free for all to see 24/7 – depending on the duration of your ad campaign, that is. Some broadcast ad spaces are subjected to a “blackout period”, where advertisements aren’t allowed to be aired on certain time slots. Your billboard ads are exempted from such restrictions, thus giving your business nothing but full exposure.

As your ad campaign is amplified on static billboards, design plays a major role in ensuring the intended message cuts through the noise, and your audience can remember you even after they passed your ad. A few tips to create attention-grabbing and memorable billboard ads:

All billboard advertisements in Malaysia require approvals from the local authorities prior to being displayed. Doing so ensures that businesses do not mislead consumers with false claims, or produce content that are deemed offensive. Hence, static billboards are considered a trusted OOH advertising medium, and the preferred choice for long-term brand building campaigns to drive consumers’ trust and loyalty.

In a nutshell, billboard advertising is not going anywhere anytime soon. If you’re searching for the best billboard deals in Malaysia, check out these Billboard Value Packages on AdEasy!

The Best Productivity Playlist To Listen To At Work

How To Plan Your Ad Campaign In 4 Easy Steps